For creation of humanized mice by transplantation of human hematopoietic stem cells (HSC), myeloablation by systemic irradiation is usually conducted prior to transplantation. However, irradiation causes a lot of damage to mice, and the marked exfoliation of intestinal epithelium cells particularly involves septicemia risk. In addition, the irradiation equipment may be often located outside the rearing facility, therefore, establishment of an alternative myeloablation method not requiring irradiation devises for humanization is desired. Busulfan treatment is known to cause a severe myeloablation in mammals. From the point of this view, we investigated the potential of Busulfan myeloablation as an alternative of irradiation as follows. (1) identification of the optimal busulfan concentration and (2) comparison of humanization efficiency between irradiation and busulfan treatment were performed to examine if busulfan can be applied as an alternative method. 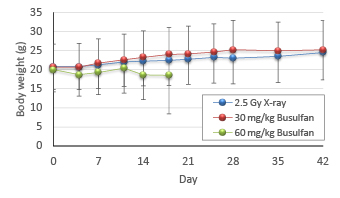 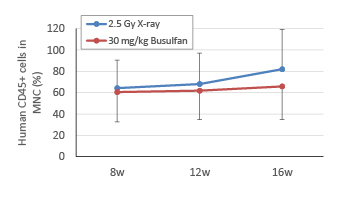 At Week 8, 12, and 16 after transplantation of human HSC, blood was collected under isoflurane anesthesia. Human cells stained with the anti-human CD45 antibody were analyzed by flow cytometry. In both 2.5 Gy X-ray irradiation and 30 mg/kg busulfan treatment groups, the same degree of engraftment of human leukocytes was observed. 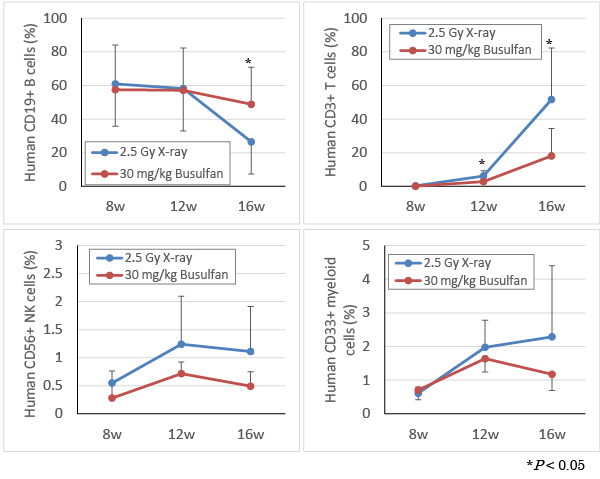 As with Figure 2, blood was collected under isoflurane anesthesia at Week 8, 12, and 16 after transplantation of human HSC. Human cells stained with various anti-human antibodies were analyzed by flow cytometry. In both 2.5 Gy X-ray irradiation and 30 mg/kg busulfan treatment groups, differentiation into human CD19+ B cells, CD3+ T cells, CD56+ NK cells, and CD33+ myeloid cells was confirmed. After busulfan treatment, differentiation into human T cells was slower than that of X-ray irradiation, whereas the percentage of human B cells increased.